I was sat with Allison in the sitting room reading an e-book I brought on Christmas morning called Crime in the 19th century Highland and islands when Peter walked into the room and handed me my Yaesu GPS transceiver VX-8G inviting me to monitor a test data transmission he was going to make in the next couple of minutes sure enough I heard a nice clean clear, signal of data burst – Peter returns asked what I heard then takes the VX-8G and head’s back to the radio shack I thought he said ISS was due soon. My ears picked up ISS due and data and only three minutes left – I must of have been on the ball the festive blues cleared and I was rushing up to the shack to see what Peter was up to. 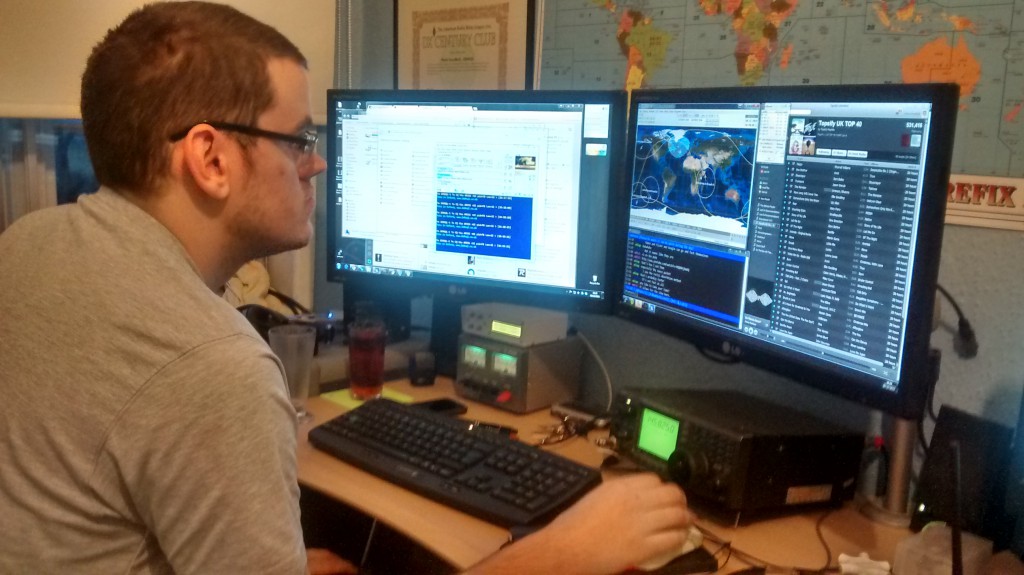 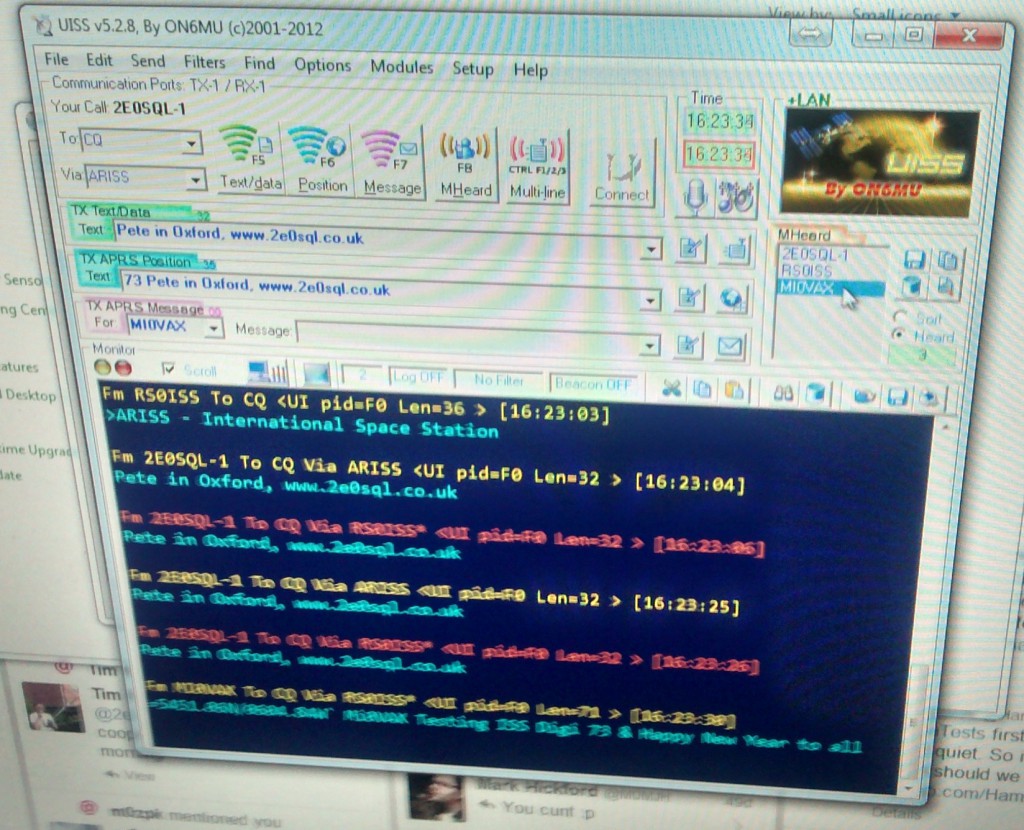 I took a couple of snaps of Peter 2E0SQL in action with my camera phone:

As the International space station came over our horizon Peter 2E0SQL transmitted some aprs data and got a response he did this a couple of times then we heard a strong data signal and Peter said that was Tim G4VXE over in Longworth interesting enough we heard his transmission on ground wave and through the International space station – I noticed later in the evening  Tim had commented on his blog “So, a few more frames digi-ed via the ISS today, and messages swapped between Pete, 2E0SQL and myself, over a ground path of around 12 miles, via a spacecraft travelling above us at 17,500MPH”. The thought did cross my mind that this might be one of the most expensive Amateur radio communication contacts of all times costing the American tax payer a few billion US Dollars.

For some weeks now the Reading & District Amateur radio Club has been running the Advanced Amateur radio licence course on Monday evening’s mostly in Tilehurst with the odd evening taking place in Reading. On Saturday I was delighted to be able to attended the Saturday workshop Peter and I took the 9am train to reading we had time to call into Costa coffee for me and hot chocolate Peter’s favourite beverage sat we sat on the station concourse this is a delight in the summer but bitter cold this time of year but our hot drinks were excellent. 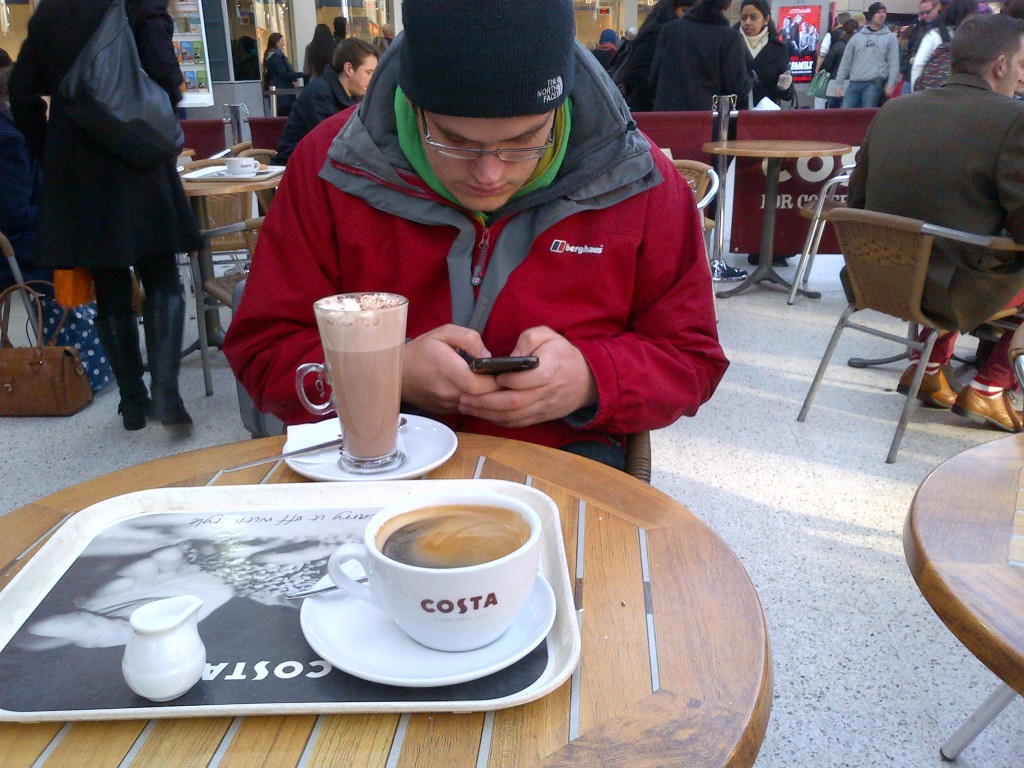 Their seemed to be no shortage of black cabs for hire at the train station and we took one to Caversham Park Village Association Hall we had a great time with Dr Allison Johnson G8ROG and David Rumens G4BOO we learnt about the VSWR meter and they work, how to make a 2m antenna without a tape measure using just using the maths and an MFJ- 269Pro analyser then connect it up to a 2m rig Avair AV-20 VSWR power meter 1.8-200MHz to see if you got it right 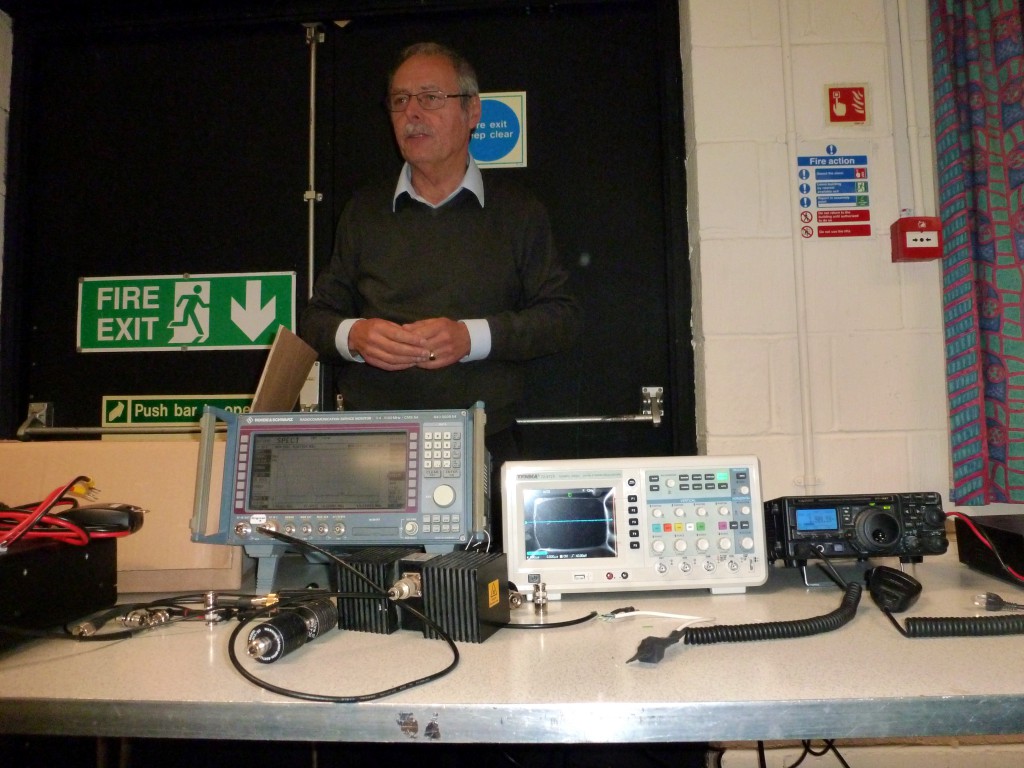 we also learnt how to find harmonics using a Radio Communication service monitor and with a 100 Mhz Digital Storage oscilloscope we learnt how to set our modulation correctly so as not to be over driving the transceiver. After lunch we learnt how to set up safely the Yaesu YA-30 antenna andto make a few contacts on HF with it. Over all I rate this as an excellent day’s training in a friendly and stress free environment and I did not feel uncomfortable asking questions.

I am pleased with the 80m Colpitts VFO Kit that I brought from RADARC (Reading & District Amateur Radio Club) on monday evening The printed circuit board was designed by Garry G4FLY. The kit cost’s the small sum of £10 – I assembled the kit on tuesday evening 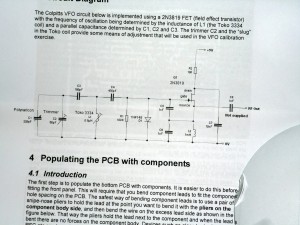 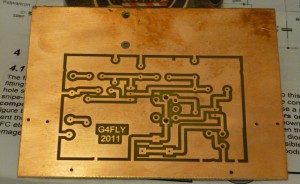 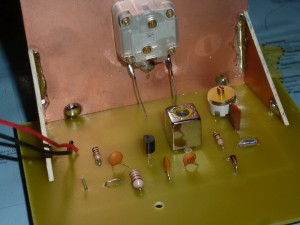 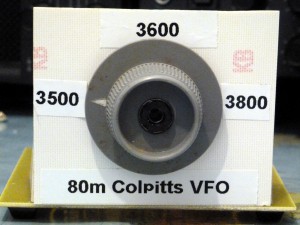