Over the following day’s I was showing a little more interest regarding what post had arrived at home first to arrive was the active antenna then a week later the sentinel receiver. When I came home from college on Tuesday 9th September my son Peter 2E0SQL told me that mum had giving the go ahead to set the new kit up under test to make sure it was all working properly and during the afternoon he had checked over his old tower computer that we had made together just before he went to college. 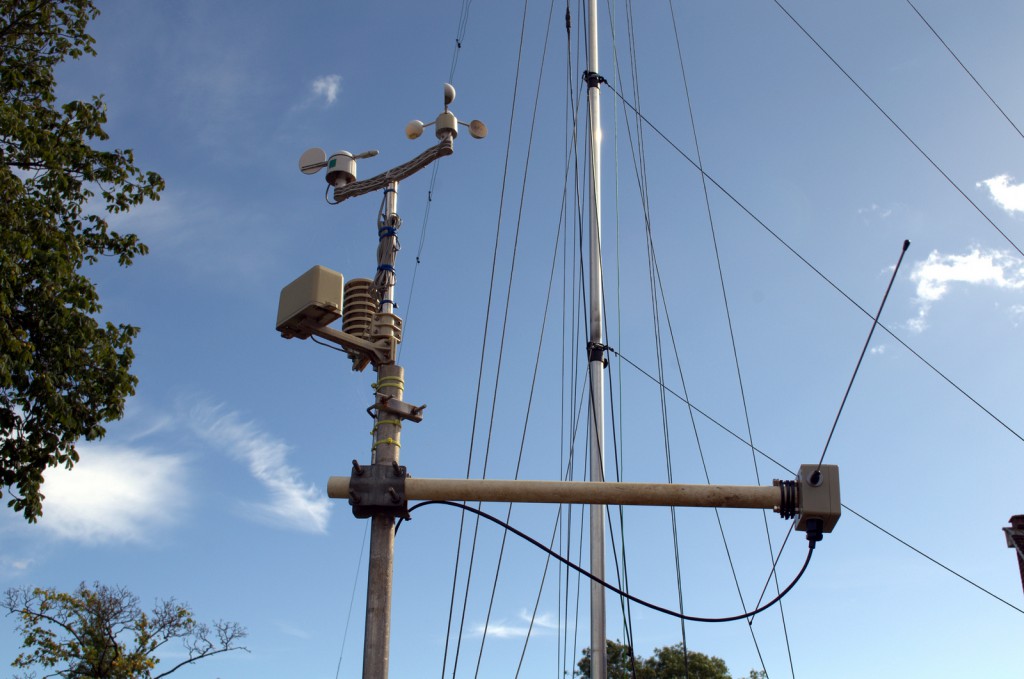 we kept the 20m of outdoor Ethernet cable off the ground this is to avoid the possibility of any little four legged furry animals having a chew at the cable. We had already decided that the best place to put the tower and sentinel receiver was in the outdoor toilet and coal house our radio shack is located above it and we could remotely control the equipment from the shack. 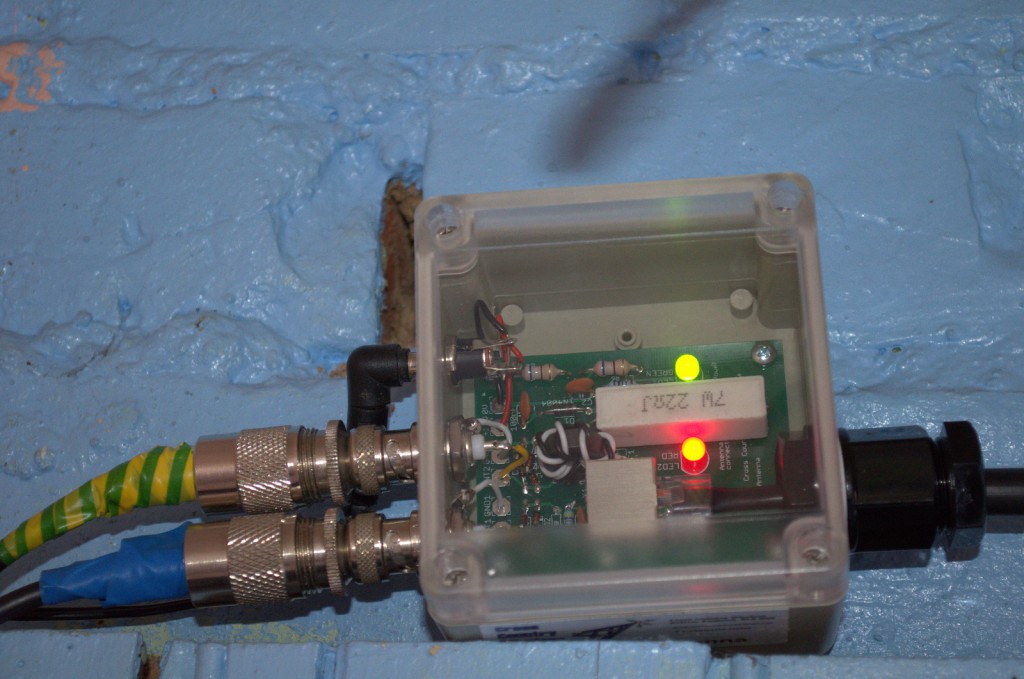 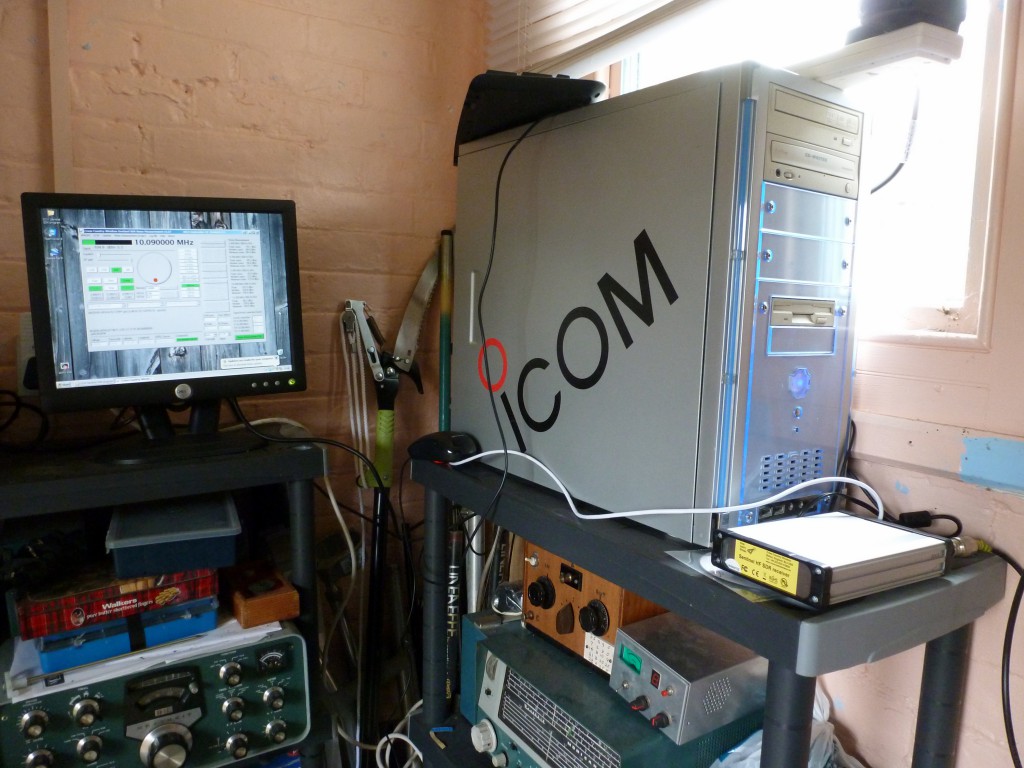 At the present time we have set things up under test and over the coming few weeks we plan to tidy the layout up however it will do for the time being. 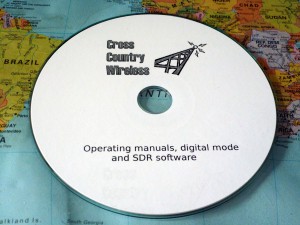 Having set the receiving station up it was time to see if it worked Cross country wireless provided a CD with the “operating manuals, digital mode and SDR software” all you have to do is load the CD onto the computer. If only it was that easy experience has taught me that often when it comes to using software it’s not like opening a tin of Ronseal “it does exactly what it says on the tin” 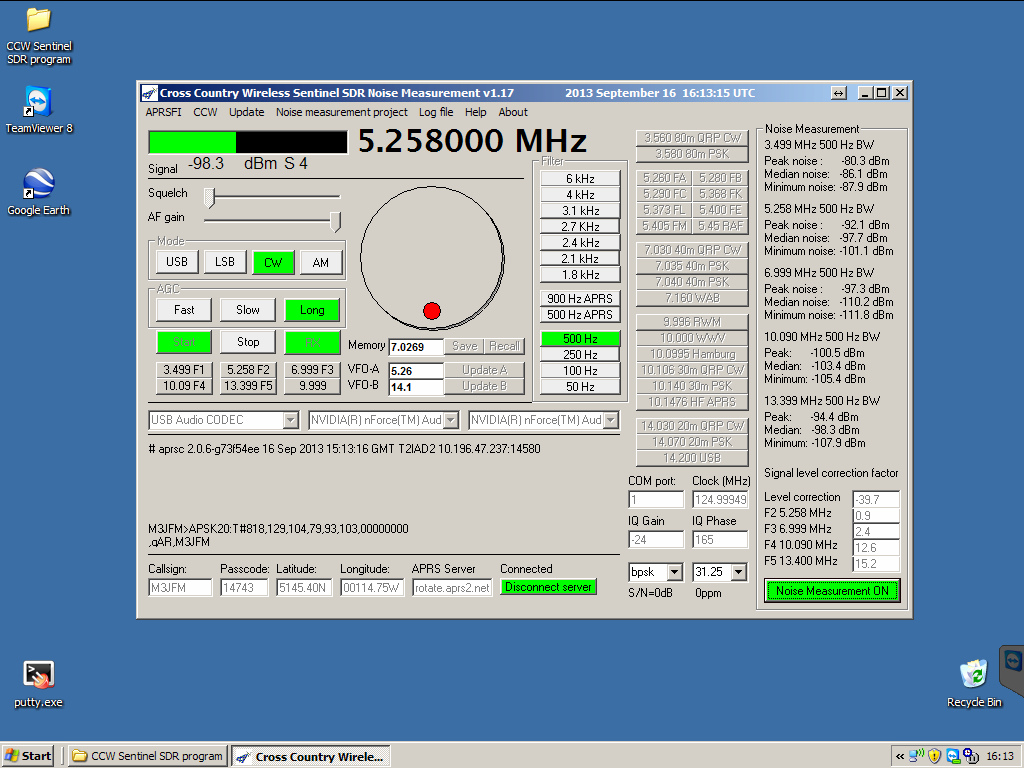 I left this part of things to Peter “2E0SQL who set the software up and got it working I understand from Peter that the software provided was a little buggy by which Peter was saying:

“A software bug is an error, flaw, failure, or fault in a computer program or system that produces an incorrect or unexpected result, or causes it to behave in unintended ways. Most bugs arise from mistakes and errors made by people in either a program’s source code or its design, or in frameworks and operating systems used by such programs, and a few are caused by compilers producing incorrect code. A program that contains a large number of bugs, and/or bugs that seriously interfere with its functionality, is said to be buggy. Reports detailing bugs in a program are commonly known as bug reports, defect reports, fault reports, problem reports, trouble reports, change requests, and so forth”.

To be honest for someone like me if the software said type in X and I did just that and then it did not work I would soon grow discouraged – thank goodness that Peter 2E0SQL got  the Sentinel SDR noise measurement receiver and SDR program to accurately measure the HF noise floor and send telemetry reports by APRS. You can find me on aprs.fi as m3jfm.

During the following twenty four hour’s I gave this project some serious thought. After all Radio Amateurs are not the only users of the radio spectrum and it would be in the interests of commercial broadcasters as well as the Ministry of Defence.  I was to discover that the MOD has done a full study of the HF noise floor in the UK and of course I could simply request there data under the freedom of information banner. It might be interesting to read these documents and I am sure I could learn a lot from them.

However for me it all came down to the simple fact that I wanted to find out what the noise level was at my home QTH and to learn how it changed during day-night- and with the season’s and this fits in very well with the Noise measure campaign who’s aim is to measure the HF Background Noise at individual locations to investigate Whether there is a national trend either towards a higher or lower background noise level. And it would be of interest to take part in the project and compare my data with others taking part.

I had couple of weeks to go before my 60th Birthday with this in my mind I spoke to my wife Allison about the Noise measure campaign its aims and objectives I said that I would like to take part in this project and would she buy me the off the shelf ready to go SDR receiver and antenna and soft ware at £329.90 to my delight she agreed and ordered the kit to arrive in time for my birthday.

Most Radio amateur’s and short wave listeners at some time or other would have discussed with like minded enthusiast the noise level that they experience when listening to the radio at their home location it’s not uncommon to hear that the noise level fluctuates depending on the time of day or year or that when a neighbour switches there television set on the local noise level rises sometimes wiping out top band or when someone switches some other device the general feeling among the amateur radio community is that the noise floor is rising.

It was in July 2012 The Radio Society of Great Britain first announced to its members in their journal “Radcom” the H.F. Noise Measuring Campaign.
“I am proposing that those participating measure (at their QTH’s) the background noise on the bands 1.8MHz to 28MHz once per month, for perhaps 2 to 3 years. The requirement would be that the level (in S-points) be noted in a spreadsheet (to be supplied), and if using an SDR Rx. the dBm figure as well. A requirement would be that the same radio and aerial setup be utilized for the whole campaign”.
That’s all well and good but when you come to think of it each Radio Amateur or short wave listener’s station set up differently no station would be set up the same surely you would need every one who is taking part to be using the same equipment.
Finally I was very interested after reading “HF Ionospheric Propagation Studies and Predictions by G4FKH – Gwyn Williams Who wrote:

“As an addition to the original Campaign exercise a special purpose SDR Rx. (Sentinel) has been developed by Cross Country Wireless (CCW), along with a very small active aerial, ideally suited to this purpose. The CCW prototypes have been running for some time at the premises of Chris Moulding, G4HYG. I have been running my Sentinel along with my active aerial for a while now and am pleased with their performances; results from both stations can be seen graphically.

It should be noted that the Sentinel can be used as a general coverage receiver for the frequencies between 2 and 15MHz, when not in use for Noise measuring. The receiver monitors 5 discreet frequencies, 3.499, 5.258, 6.999, 10.090 and 13.399MHz. Each QRG is monitored in turn during a ten minute period, the median results being sent into the APRS system. Because of the reporting requirements, the controlling PC must have Internet access.”

I checked out the Cross country wireless website for the Sentinel HF SDR Noise Measurement receiver and program and I noted the following on their website:

We have now released the Sentinel SDR noise measurement receiver and SDR program to accurately measure the HF noise floor and send telemetry reports by APRS. The Sentinel receiver and program also works well as a general purpose SDR receiver covering 2 to 15 MHz.
The MMVARI digimode program is built into the Sentinel SDR program to allow decoding of PSK, QPSK, RTTY and GMSK HF data modes using the PC internal sound card. Recent telemetry reports from a prototype receiver can be viewed here. Results after 6 January use the current software and frequency list. The software scans five HF frequencies and provides the peak, median and minimum levels of 500 measurements per frequency every 10 minutes. The receiver bandwidth is 500 Hz.

The five frequencies used are:

As the receiver uses a built-in sound card the calibration is independent of the PC used and it will be supplied with calibration information trace able back to National Standards. This will allow the RF level and frequency measurements to be calibrated to a professional standard.

The program uses serial port control of the DDS synthesiser. The program runs on Windows 2000 or Windows XP with a low CPU load so that older PCs and laptops can be used.

A beta version of the Sentinel SDR program can be downloaded here. Unzip the file as a folder, move the folder to the C: drive and open the .EXE file in the folder.

A FAQ sheet for the Sentinel receiver can be downloaded here.

24 July 2013…The first production batch of Sentinel receivers are now ready for sale at £169.95 plus shipping.

With off the shelf ready to go SDR receiver, soft ware and active antenna the whole project become’s very do able however the only limitation is how deep are your pockets £329.90 is a big ask