This afternoon I used my yaesu VX-8G GPS transceiver and Peters 2E0SQL 2m X quad antenna to send aprs data to the international space station. I was Successful on my second attempt I had tried just after lunch using the hand held and rubber duck antenna but I was getting nowhere with this and thought that on the next pass I might use Peters arrow antenna instead of the rubber duck but on second thoughts due to the variable weather we are having over this Christmas season I came up with the idea of using Peter’s 2m beam this proved to be the right combination for success. 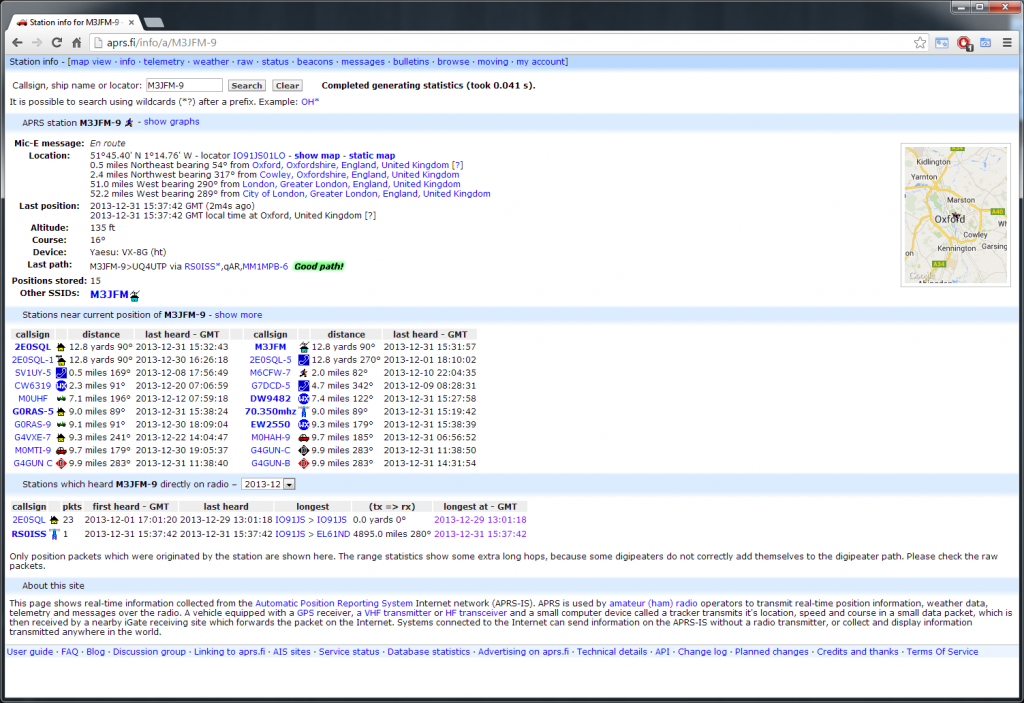 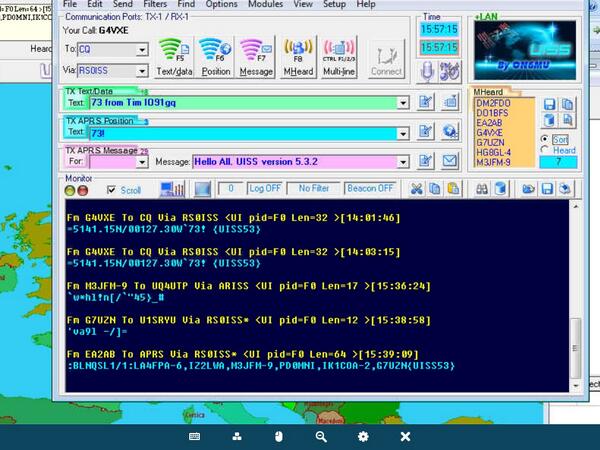 And Tim G4VXE heard me and sent me the above screen shot. 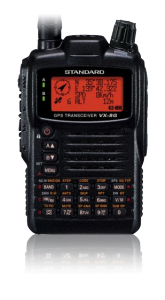 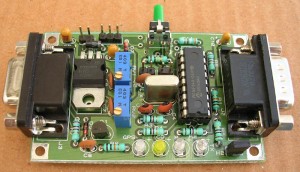 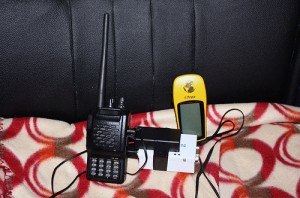 Peter had a lot of fun with the above set up taking it out with him on his bike or when out helping at the club field day site. I was interested in doing some thing in the shack and I soon got interested in the Foxview2

The FOXVIEW was the first amateur radio project ever built for radio amateurs to view APRS packets without a PC or expensive APRS Enabled Radio Equipment. FoxView2 is called an APRS Terminal. Intended for Base Station use,

FoxView2 will do the following:

1. Its an LCD APRS Viewer with Filters.

2. A Tracker with GPS# 3. A GPS-less APRS Position encoder

4. A stand-alone (No PC) Digipeater

The  FoxView2 has been running in the radio shack for a year mostly set up with Peter’s call sign however when is was away with the Cam-hams on the Scottish island of Mull Peter set it up to transmit my call sign – I had read in the radio press about the Yaesu VX-8G  I thought it might be fun using the radio when I am out and about in the Great out doors walking or on my bike. The Yaesu VX-8G/E (Europe) is a 5 watt GPS 2m/70cm Dual Band FM Handheld Transceiver has Wideband Receive (108-999MHz) with a built-in GPS antenna and Data Terminal, but, unlike his older brother the VX-8D, no Bluetooth® capability.The VX-8G is fully rugged and waterproof (IPX5) design, and is perfect for extreme sports and outdoor use. The VX-8 Series radios are compatible with the world wide standard APRS® (Automatic Packet Reporting System) using the GPS system to locate and exchange position information and more. I ordered one from ML&S and it arrived on Friday morning.

Peter set it up and he was the first to try it out on Sunday afternoon he cycled on the following route as recorded on aprs.fi 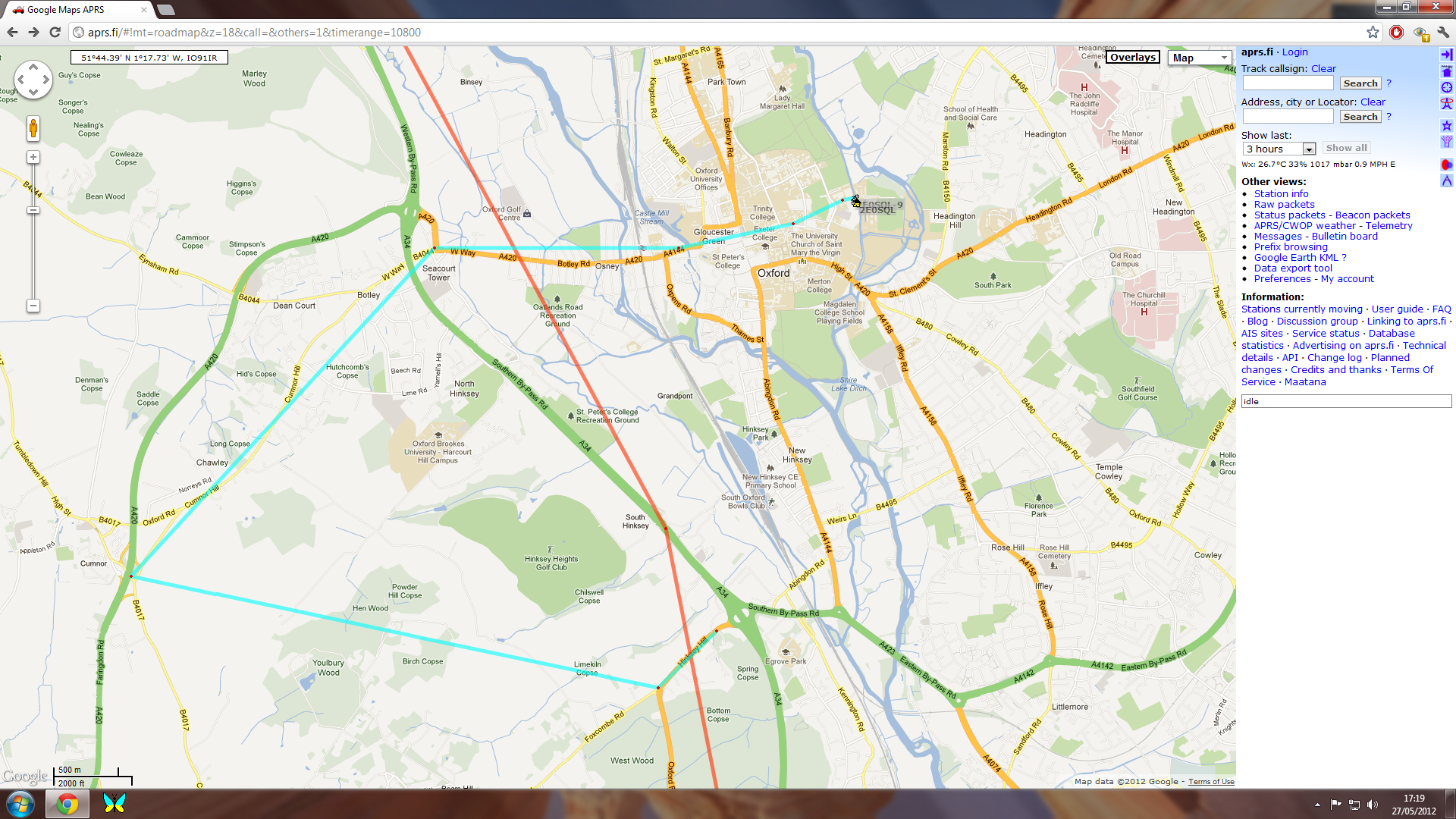 I monitored Peter’s progress from the shack while he was in town we were able to speak to each other on 70cms only changing over to 2m after Peter got to the bottom of Boars Hill. while Peter was at the top of Boars hill I heard Peter on 145.400 in QSO with Mike M1ELK/M  who was parked on Bury down.