Shotover Country Park offers everyone a chance to enjoy a place of beauty and history right on the edge of Oxford. Covering 117 hectares (289 acres) on the southern slopes of Shotover Hill there are spectacular views from the top across south Oxfordshire. The park is an intimate mosaic of hidden valleys, varied landscapes and diverse habitats, a haven for wildlife and an ideal setting for peaceful enjoyment of the countryside. The landscape of Shotover has changed throughout its history. From Saxon times until the Civil Walk (1640s) Shotover was part of a Royal Forest providing a hunting ground for noblemen, fuel and grazing for local people and timber for many of Oxford’s historic buildings. In 1660 Shotover ceased to be a Royal Forest and became open farmland, which was grazed or cultivated. Until the end of the 18th Century, 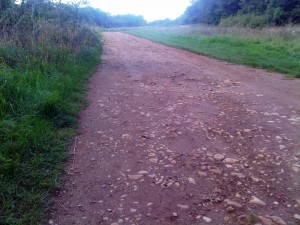 the main road to London passed across Shotover Plain. Travellers often fell victim to highwaymen here. From the late 1930s Oxford City Council started to manage Shotover as a park and two wardens were employed to look after it. During the first half of the 20th Century, farming ceased at Shotover and woodland started to establish. During World War II, Slade Camp was part of Cowley Barracks and provided a temporary home for soldiers who took part in the D-Day landings. At the same time Shotover Hill was used for military training and tanks built at Cowley were tested there. From the late 1970s work started to clear woodland to restore heath, grassland and marsh habitats.

Peter and I approached Shotover from the Oxford side.  The old road is fairly steep once you cross over The bye pass bridge  I was the first one to dismount from my bike and start walking up the  hill Peter 2E0SQL being younger and fitter cycled on a few yards further before stopping and joining me in the walk up the hill upon reaching shotover hill and reaching the communication mast we walked into Mary Sadler’s field  we sat on the bench under the tree at the top of  the field Peter and I enjoyed the panoramic views from the West,  South, and East it was from here that we tired our first test to see what 2m and 70cm repeaters that we could hear and of course open. Later we were to make the same test from our second location that is found by going onto shot over plain and half way between the risinghurst foot path  and the farm looking North. 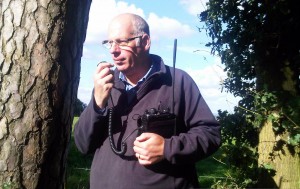 It was while we were at our second test location that Peter and I noticed three Red Kites they are distinctive because of their forked tail and striking colour predominantly chestnut red with white patches under the wings and a pale grey head. They have a wingspan of nearly two metres but a relatively small body weight between 2 – 3 Ibs. This means the bird is incredibly agile, and can stay in the air for many hours with hardly a beat of its wings. They are a delight to watch.

For our experiment with used the FT817ND with the standard rubber duck antenna.

From Shotover Peter and I could open the following repeaters

And the following on 70cms: